PHOENIX — One week ago, Donald Trump endorsed Thielian acolyte and MAGA Republican Blake Masters in the GOP Senate primary, throwing gasoline on the already blazing GOP Senate primary. Within 24 hours, the endorsement triggered a full ad war and in the last week, things have only escalated further with personal attacks, oppo drops, and promises of an “ugly” home stretch in this already combative contest.

Don’t believe us? See below for a roundup of coverage and the three biggest takeaways:

Trump’s endorsement could help Masters, but the primary was a close three-way race in polls taken before Trump’s selection. There’s no guarantee Masters will prevail.

Blake Masters finally got Donald Trump’s blessing, the only thing setting him apart from his competitors in the Republican Senate primary to take on Democrat Mark Kelly.

And even then, none of the candidates have given voters much to set them apart on policy. Voters may as well roll the dice when casting their ballot.

I’m not sure that Donald Trump’s endorsement of Blake Masters in the Arizona GOP primary for U.S. Senate will have as much of an influence as commonly thought.

Jim Lamon has plenty of money to stay in the race and make his case. […] Politically, Masters is a bit of an odd duck. He’s part of a new right with sentiments that haven’t yet gelled into a discernible political philosophy.

Arizona’s GOP primaries are heating up as Republican rivals in the crowded Senate race accuse each other of antisemitism and being tools of China.

In one of the most closely watched political contests of the year, businessman Jim Lamon unleashed his latest salvo on Blake Masters, accusing the former Thiel Capital chief operating officer and newest Donald Trump endorsee of being an antisemite.

One of Masters’s main foes, business executive Jim Lamon, is already bashing him for his Big Tech past and controversial statements he made as a college student.

These races are going to get ugly, quickly.

Thiel had privately lobbied Trump to endorse Vance and Masters, in addition to pouring millions into super PACs supporting both men. Just weeks before Trump unveiled his endorsement of Masters, Thiel made another $3.5 million contribution to Saving Arizona, the Masters-aligned group — on top of an initial $10 million investment.

[On why Trump ultimately chose Masters] One key factor was Masters’ attendance at a screening of the 2020 election conspiracy documentary, “2,000 Mules,” at Mar-a-Lago last month — a move Trump thought gave him an edge over the other candidates, according to two sources.

Meanwhile, Trump felt Brnovich was “weak” on claims of 2020 election fraud as attorney general — and made those feelings known in his endorsement message, calling him “such a disappointment.”

[Masters] has said “I think Trump won in 2020,” and has claimed that election officials, the media and big tech companies “conspired to manipulate the 2020 election.”

Trump again attacked Brnovich in his statement endorsing Masters, repeating the falsehood that the election in Arizona was “rigged and stolen.” 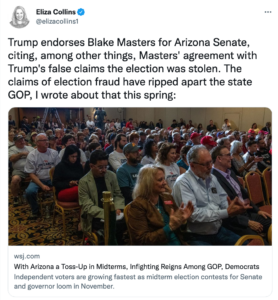 As January 6th Hearings Get Underway, Where Do GOP Gubernatorial Candidates Stand Now?