The Lamon vs. Masters Catfight Continues

Last Friday, Jim Lamon turned up the temperature in this already heated GOP Senate primary, releasing a new ad on Phoenix and Tucson airwaves to introduce Arizonans to his opponent, “fake” Blake Masters, “the puppet of California Big Tech.”

Twelve hours later, Blake Masters responded with a temper tantrum tweet thread, calling Lamon “desperate” and “lame” and trolling the self-funded multi-millionaire for “getting rich from Chinese solar” and “giv[ing] hundreds of thousands of dollars” to buy up endorsements “like a mob hit or something.”

Lamon then hit back, mocking Masters’ “meltdown” and making no apologies for “expos[ing] him for who he really is”: A puppet candidate propped up by his billionaire benefactor and “Silicon Valley Big Tech funded, Facebook money.” 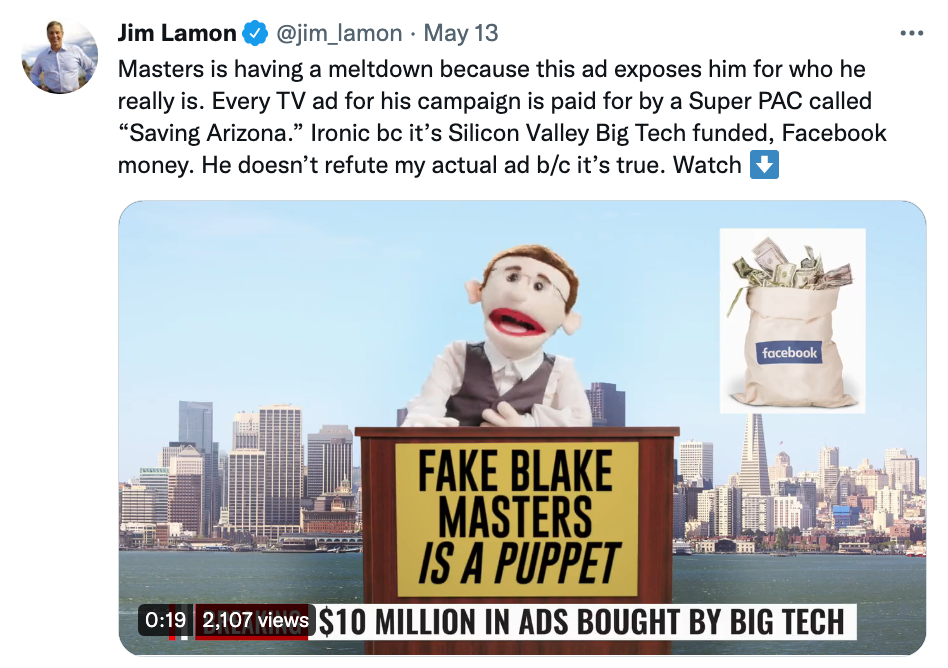 “The gloves are off in this already brutal GOP Senate primary, and these C-list candidates aren’t pulling any punches,” said ADP spokesperson Hannah Goss. “For the next three months, Arizona voters will watch while Jim Lamon, Blake Masters, and Mark Brnovich tear each other apart for everyone to see, leaving whichever clown (or puppet) who manages to crawl out of this primary badly bruised and poorly positioned to run in this fall’s general election.”
###
Back to News