MEMO: The State of the GOP Senate Primary Heading into 2022

To: Interested Parties
From: The Arizona Democratic Party
Date: January 5, 2022
Re: The State of the GOP Senate Primary Heading into 2022

As Arizonans enter into the 2022 election year, there are three main factors defining the fluid, expensive, and chaotic Arizona Senate GOP primary race:

These dynamics ensure that whoever makes it out of the primary will be irreparably damaged, after spending a year or more competing for the support of a former President, instead of serving Arizonans. Don’t believe us? Ahead of Trump’s rally on January 15th, watch these candidates work to prove they’re the most in line with Trump, whether or not he endorses them.

This landscape stands in contrast to Senator Kelly’s strong fundraising advantage and our Mission for Arizona Coordinated Campaign, which kicked off earlier than ever before and is talking to voters in every corner of the state about Senator Kelly’s record of delivering results for Arizonans.

Here’s a state of the GOP primary kicking off 2022:

With seven months to go before Arizona’s late primary, the GOP candidates have already begun attacking each other – online, in print, and in-person – with a combativeness that only serves to further alienate Arizona voters turned off by their brash, nonstop attacks.

Inside Elections: “The Republican contenders will be primarily focused on each other until August.” 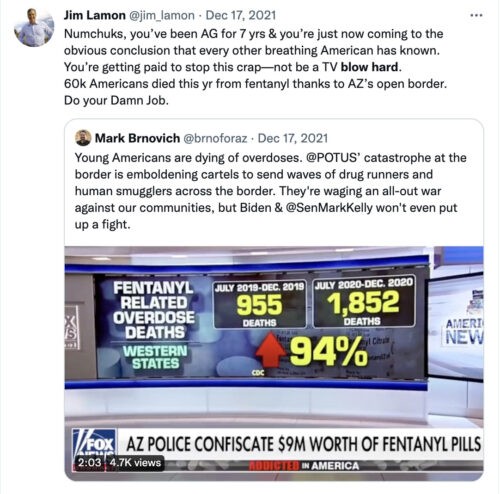 Politico noted the infighting between Brnovich and Masters:

“Attorney General Brnovich is no stranger to attacks from the left, but it is sad that we are seeing politically motivated disinformation coming from unvetted members of his own party just days after he launched his campaign for US Senate,” Brnovich campaign spokesman George Khalaf said. 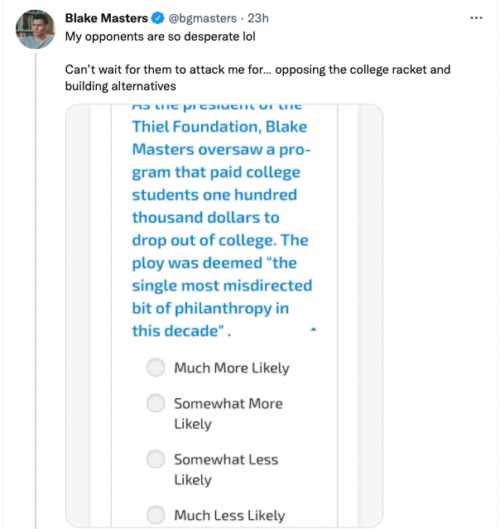 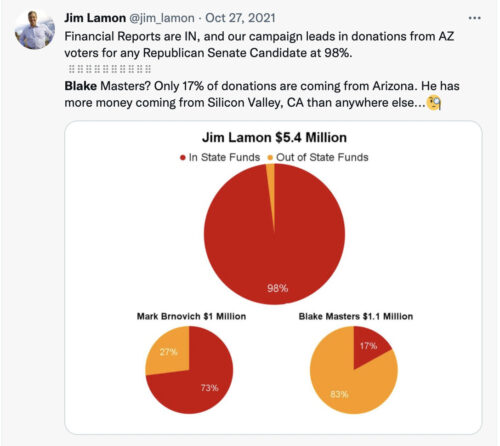 In the months since they entered the race, reporting has shown each of the GOP senate primary candidates to be out of touch with the issues that matter most to Arizonans – like lowering costs and rebuilding the economy. Instead, they’re solely focused on putting their own political ambitions first.

In an announcement video, Lamon lamented the power “to spend so much money, our grandchildren will struggle to pay off the debt” while an on-screen headline noted that Congress has already spent $4 trillion in COVID-19 relief spending.

But records show his own company, Depcom Power, received $2.6 million in relief last year from the Paycheck Protection Program…

In a written statement on Wednesday evening, a spokesperson for Lamon’s campaign said Depcom plans on paying back the funds.

Vice also discovered that Lamon does not even own any property in Arizona:

Recently [Lamon] built a massive ranch in Utah. Lamon even featured a photo of himself outside the Utah ranch on his Senate campaign website.

Brnovich’s“laughable” lawsuits, threats to withhold public safety funding in Maricopa County over the sham “audit,” and an office-sponsored “TV” program have all led the Arizona Republic to write: “Mark Brnovich has transformed the AG’s office into his Senate campaign office.”

Just in time for next year’s Senate campaign, Attorney General (and just coincidentally, Senate candidate) Mark Brnovich is launching his own TV channel.

He (and by he, I mean “we”) has even hired a former TV news anchor to run the operation…

Or put another way, in a desperate effort to stay competitive in a hotly contested Republican Senate race where other, Trumpier candidates stand ready to spend whatever it takes to win.

Arizona Daily Star: “The Arizona Board of Regents is asking that Attorney General Mark Brnovich be investigated and disciplined by the agency that regulates lawyers.”

(And don’t even get us started on the nunchucks.)

As Inside Elections noted, Blake Masters “will have to counter charges that he’s a Big Tech-funded, Silicon Valley candidate who moved back to the state after 14 years away just to run for office and perceptions that he’s in Thiel’s pocket because of his financial ties to the billionaire.”

NY Post: You can have dinner with Peter Thiel if you donate $5,800 to his employee’s US Senate campaign

“Is this member of Congress here to serve the voters or do the bidding of a wealthy donor?” said Delaney Marsco, senior legal counsel for ethics at the Campaign Legal Center.

“His way of telling voters I’m going to step away from the company, we don’t really know what that means until it comes to pass.”

Lamon isn’t the only jetsetter in the Arizona GOP primary, however. One of his opponents, Blake Masters, grew up in Tucson, left to attend Stanford University in 2004, and after law school there stayed in Silicon Valley to work for billionaire PayPal founder Peter Thiel.

And you’re forgiven if you forgot that Mick McGuire and Justin Olson have also entered the race.

The Trump-Shaped Elephant in the Room

The 2020 election may have ended over a year ago, but don’t tell these primary candidates, who have centered the entire race around it, making the sham Arizona “audit” a “purity test” in the race at the expense of the state’s most pressing issues. Even Republicans are calling it an “albatross around the neck for every Republican running.”

So, what is currently defining the Republican brand in Arizona as the party enters into this electoral season of opportunity? The farcical and fraudulent “audit” of the 2020 presidential results in Maricopa County being conducted by state Senate Republicans.

“The audit is an albatross around the neck for every Republican running in the state of Arizona,” said Chris DeRose, the former clerk of the superior court in Maricopa County and a Republican lawyer.” 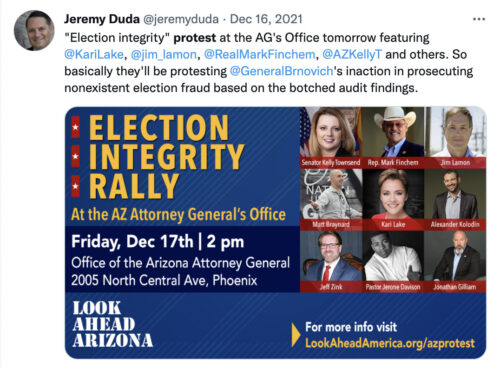 AZ Republic: Opinion: The knives are already out for Mark Brnovich and the primary is still 11 months away

Brnovich is one of four Republicans – along with Masters, retired Maj. Gen. Mick McGuire and solar energy entrepreneur Jim Lamon – running in a 2022 race that is apparently going to be all about 2020.

First fixating on the sham, conspiracy-driven “audit” and now Brnovich’s investigation into the 2020 election, these candidates have shown no interest in addressing issues that matter to Arizonans, as they vie to prove who is most loyal to former President Trump ahead of his visit on January 15th.

The bottom line: The fluid and nasty GOP primary has already turned expensive and personal, and remains largely fixated on the 2020 election, instead of the issues that actually matter to Arizonans like the economy and health care. Whether or not Trump ultimately endorses, this entire field will remain locked in an intra-party fight that will leave their eventual nominee deeply damaged.

And while the temperature increases in the GOP primary, Senator Kelly has continued his work with Republicans and Democrats to lower costs and create good-paying jobs for Arizonans.

The election is still months away, but Republicans’ expensive intra-party contest stands in stark contrast to Senator Kelly’s fundraising and infrastructure advantage, and the Coordinated Campaign’s historically early start to persuade and turn out voters.