PHOENIX –– Earlier today, Arizona Democratic Party Chair Raquel Terán moderated a roundtable discussion in Spanish with parents from across Arizona on how President Joe Biden’s expanded Child Tax Credit has positively impacted Latino communities in the state and across the country.

The parents joining the roundtable praised the Biden-Harris administration and Democrats in Congress for child tax cuts passed in their American Rescue Plan, which has helped their families recover from a pandemic that has hit Latino communities in the state especially hard as a result of the failed leadership of Arizona Republicans like Governor Doug Ducey. 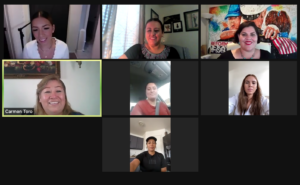 Thanks to President Biden’s American Rescue Plan, the families of 1.5 million children in Arizona received extended child tax credit payments of up to $3,600 per child. Long term, if this tax relief is extended under Democrats’ proposed American Families Plan, child poverty across Arizona would be reduced by 51 percent.

Spotted: Brnovich Failing to Walk the Most Pointless Tight Rope in Existence