Release: Arizonans Are Fired Up Following 2022 Mission for Arizona Launch

PHOENIX — Yesterday, the Arizona Democratic Party, in partnership with the Democratic Senatorial Campaign Committee, launched the 2022 Mission for Arizona Coordinated Campaign, earlier than any previous coordinated campaign in Arizona.

And it’s safe to say Arizonans are fired up and ready to get to work to re-elect Senator Mark Kelly, win the governor’s race, and support Democrats up and down the ballot.

Check out some of the coverage and reactions below:

McEnerney said the 2022 Mission for Arizona effort will focus early on building relationships with young voters and Latino voters. By starting so early, he said the party will have three semesters to register Arizona college students, get them engaged in campaigns and encourage them to vote…

“Democrats are really excited and engaged, and we’re going to put in the work over the next 18 months,” McEnerney said. 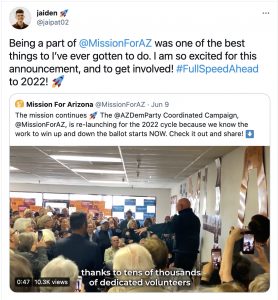 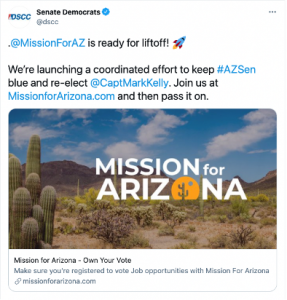 “Senator Kelly and Democrats up and down the ticket have been hard at work delivering real results on the issues that matter most,” said state party Chair Raquel Terán. “Mission for Arizona will organize in every corner of the state to elect Democrats working so hard on behalf of all Arizonans.” 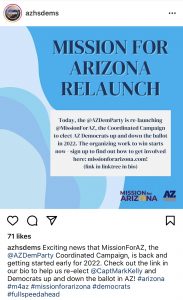 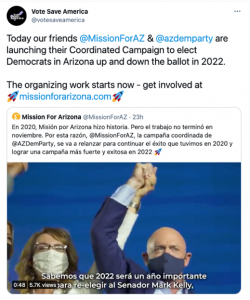 Release: Summer in Sights Thanks to Biden-Led Pandemic Recovery