TUCSON – Yesterday, Tucson-area veterans held a press conference responding to newly reported comments by Blake Masters where he repeatedly attacked U.S. military personnel, described them as “totally incompetent,” “rotten,” “bozos” and called to “clean house” of all existing generals, replacing them with Republicans.

At the event, a group of United States Marine, Army, Navy, and Air Force veterans stood together to condemn Masters’ comments, calling them “disqualifying,” “disgraceful,” and “truly disrespectful”. Veterans at the event pointed out that Masters, who has no record of military service, has absolutely no right to criticize the service and sacrifice of the nearly 500,000 veterans who call Arizona home and that his position is just wrong for Arizona. 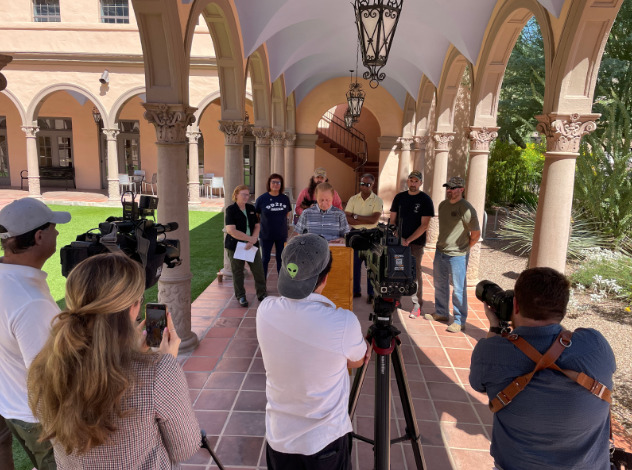 See below for quotes from yesterday’s event:

Air Force veteran Sylvia Gonzalez Andersh: “I spent four years of my life on active duty, proudly serving my country — something that Blake Masters has never, ever done. And yet, he has the audacity to say — and these are his own words — that our military is ‘totally incompetent’…After spending almost 20 years taking care of veterans in VA hospitals, I find that insulting to me but especially to them.”

Marine Corps Vietnam War veteran Don Womack: “Blake Masters truly does not respect any of us. He doesn’t care that I, like countless Americans before me, put everything on the line to defend our nation. To protect our freedoms. To keep us safe…At the end of the day, what Masters has said is nothing short of disgraceful. His comments are a personal attack on me and every other veteran and military family who has sacrificed to serve our country.”

Arizona Army National Guard veteran Sue Ritz: “The people of Arizona have a proud tradition of respect for our military. We honor our veterans and we’ve even elected them to represent us in public office. Arizonans across the political spectrum — Democrats, Republicans, and Independents — all respected the late, great Senator John McCain, his service to our country, and his sacrifices as a prisoner of war. …But listening to a guy like Blake Masters insult our military, while running against Mark Kelly — a Navy combat pilot — for the seat once occupied by the great Senator John McCain, well that’s an insult to everyone.”

MASTERS MOMENT: The One Where He Says Masculinity is Being “Outlawed”

MASTERS MOMENT: The One Where He Says Eliminating the Department of Education Is the “First Thing That I Want to Do in DC”