And today, the Arizona Democratic Party is marking the anniversary of Governor Doug Ducey publicly declining former President Trump’s call to certify the 2020 election with a newly released video.

One year ago today, Ducey and Mark Brnovich did their jobs — but since then, have displayed a total lack of courage amid Trump’s calls to decertify the election. Cowering in the face of Trump’s rage for their own political success, Governor Ducey has remained silent in the face of the expensive and harmful sham “audit,” while Brnovich has gone so far as to investigate the 2020 election at Trump’s request.

Their actions reek of two politicians desperate to catch up to Blake Masters and Jim Lamon, who have proudly championed the lies and conspiracies around the 2020 election for over a year. 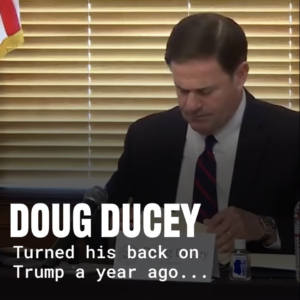 “On the anniversary of Doug Ducey doing the right thing — refusing to take former President Trump’s call and instead certifying the 2020 election — Arizonans are reminded of just how fixated Arizona’s GOP politicians remain on an election that took place over a year ago,” said ADP Spokesperson Sarah Guggenheimer. “Desperate to earn Trump’s support, or at least stop his constant attacks, these politicians have all shown they care more about the lies and conspiracies of the past than working to address the issues facing Arizonans today.”
###
Back to News