Martha McSally Is Running On Her Health Care Record

PHOENIX — Take it from Sen. Martha McSally, she is not running away from her long record of voting to increase health care costs and gut protections for the 2.8 million Arizonans with pre-existing conditions.

McSally was on Friday interviewed about her health care record, and when the interviewer suggested that McSally might be somehow “changing” or “evolving” on health care policy, McSally quickly batted down the suggestion with an emphatic “Fake News!”

In 2018, McSally admitted that she was getting her “ass kicked” over her votes to drive up costs and strip away Arizonans’ coverage, but that hasn’t stopped McSally from doubling down on her failed 2018 campaign strategy, including her decision to, once more, run on a record of voting to drive up Arizonans’ health care costs.

“Arizonans should take Martha McSally at her word when she says she’ll keep fighting to increase health care costs and strip away coverage protections for people with pre-existing conditions,” said Brad Bainum, Arizona Democratic Party spokesperson for the 2020 Senate race. “McSally has always put her big donors and corporate special interest backers first in Washington, so it’s no surprise that she’d keep fighting to take away Arizonans’ health care access.” 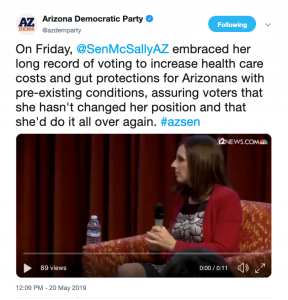