ICYMI: Terán: Arizona Republicans tried to block $150M in tax cuts from families in their districts

The middle-class tax cuts under President Biden’s American Rescue Plan are helping families cover the cost of raising kids by delivering direct monthly payments of $444 (on average) to pay for anything from groceries and school uniforms to child care expenses. 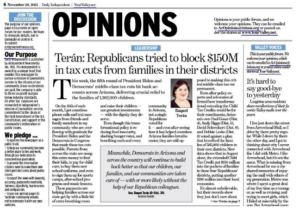 See below for key excerpts from her piece: