ICYMI: Sec. Granholm, Mayor Gallego Tout Biden’s American Jobs Plan as the “Key to Seizing on a Transformational Moment for the Economy” 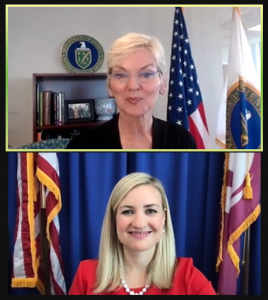 During their conversation about the once-in-a-generation infrastructure proposal, Secretary Granholm highlighted the importance of the American Jobs Plan’s investment to help the U.S. win the race for clean energy technology while simultaneously creating millions of good-paying jobs:

At the end of the briefing, Phoenix Mayor Kate Gallego encouraged local business leaders to support President Biden’s American Jobs Plan that would build upon her progress, bring even more jobs to Phoenix, and allow us to rebuild and reimagine Arizona’s infrastructure.

A graduate of the Wharton School, Mayor Gallego also highlighted how large corporations and the thousands of jobs that come with them have come to Phoenix as she has secured funding for clean, quality infrastructure projects—and how additional federal funding would help create even more well-paying, green jobs.

Release: Do GOP Senate Primary Candidates Think Trump is Still the Leader of the GOP?