The vast majority of Americans want to build back better, and they want to do it now

PHOENIX –– Since President Joe Biden took office, the families of 1.3 million Arizona children have received a major middle-class tax cut, the Arizona unemployment rate has fallen to a new pandemic-era low, and the U.S. economy has added over 4 million jobs — including 100,000 right here in Arizona.

Thanks to Biden and Democrats, America is building back better — and that’s why the majority of Americans not only support President Biden’s economic agenda, but they say passing this economic legislation is urgent. 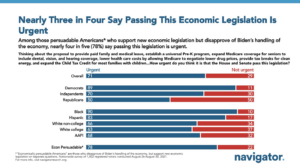 This optimism and urgency for further action stem from the public’s overall support of President Biden’s leadership and job performance when it comes to beating the COVID-19 virus, rebuilding America’s infrastructure, and driving our economic recovery.

Where in the World is Blake Masters?