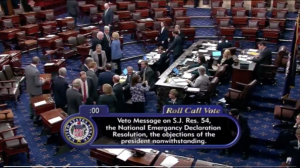 PHOENIX — In her latest move to put her political career ahead of Arizonans, U.S. Sen. Martha McSally has — for the third time — voted to let Donald Trump raid $30 million in military construction funding from a project at Arizona’s Fort Huachuca.McSally has repeatedly defended the Trump administration’s Fort Huachuca funding raid — even trying to downplay the $30 million cut as “small.”
And today, when the Senate had its latest opportunity to stop Trump’s military funding raid, McSally again voted to allow the raid — helping to ensure that the override of Trump’s veto failed.
Today’s vote followed the Senate’s bipartisan, late-September effort to overturn the military construction funding raid — a measure that McSally similarly voted against, and which Trump subsequently vetoed, leading to today’s override vote.

While McSally has repeatedly defended and voted for the funding raid, the Department of the Army has urged the completion of the Fort Huachuca project in order to correct “unsafe” conditions and “promote a healthier, safer work environment” for military personnel.

“Like clockwork, Martha McSally keeps proving to Arizonans that she cannot be trusted to stand up for our state in Washington,” said Brad Bainum, Arizona Democratic Party spokesperson. “When it comes down to it, Martha McSally will always vote to put her party and corporate special interest backers first, and will never hesitate to sell out our state.”

On This Day: McSally Failed To Defend Her Toxic Health Care Record