The AZ Independent Redistricting Commission was created to take politicians out of the redistricting process. Senator Vince Leach’s maneuvering shows the GOP is successfully gaming the system in 2021.

Phoenix – Research conducted by a firm contracted by the Arizona Democratic Party uncovered evidence that Arizona Senator Vince Leach (LD 11), a Republican incumbent who is currently seeking reelection, has led a successful advocacy effort to ensure his place of residence is drawn into a safe Republican legislative district in the IRC’s draft legislative map.

Independent Redistricting was incorporated in the Arizona Constitution after voters approved Proposition 106 in November 2000. The central goal of Prop 106 was to remove politicians from the process of drawing their own political boundaries.

Senator Leach’s maneuvering, which includes at least two employees of the Arizona State Senate –Grant Hanna the Deputy Chief of Staff and Galen Kimmick the Executive Assistant to Senator Leach– appears designed to present advocacy supporting Leach’s preferred map as though it is coming from “communities of interest.” In reality, the advocacy is being directed by an incumbent Senator in support of a map drawn by a partisan operative. This distinction is significant because the Constitution allows the IRC to consider “communities of interest” while drawing legislative boundaries, but prohibits them from considering the residency of incumbents.

“Arizonans wisely took the power of drawing their own districts away from self-interested politicians, and for twenty years Arizona has been a national model for independent redistricting. Senator Leach’s behind-the-scenes efforts to masquerade this blatant attempt to protect his own incumbency in a non-competitive, Republican-dominant district are shameful. His actions have subverted the will of the voters and the spirit of independent redistricting.”

On October 20, 2021 Senator Leach emailed Marana Mayor Ed Honea a copy of a letter the Senator said he wanted to be sent to the IRC. The letter, without any substantive changes by the Mayor or his staff, was transmitted to the IRC the next morning on official Town of Marana letterhead.

Central to the letter’s argument is including Saddlebrooke, the Pinal County town that Senator Leach resides in, in a legislative map that excluded neighboring Democratic areas to create a safe Republican district.

Shortly after records show that the letter was approved by Senator Leach, Republican Commissioner David Mehl cited the letter as evidence that communities of interest supported a controversial map, SaguaroMaps002, that was drawn by Pima County Republican Party Vice Chair Anna Clark. Anna Clark is among the signers of the Marana letter. 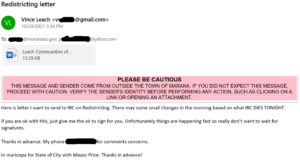 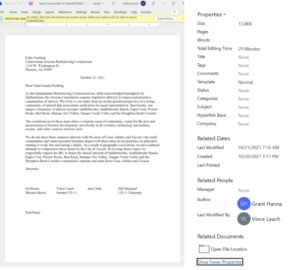 Draft letter provided by the Town of Marana with MS Word file properties that shows Grant Hanna wrote this draft of the letter.

A flurry of emails between Marana Mayor Ed Honea, Marana’s Linda Dralle, Senator Leach (on his personal gmail account), and AZ Senate Executive Assistant Galen Kimmick (on his azleg email account) clearly shows that Leach is the driving force behind this letter and with the support of Senate staff rushed its approval in order to get it to the IRC for consideration, not on Senate letterhead, but Marana letterhead.

On November 7, 2021 Senator Leach emailed Marana Mayor Ed Honea requesting he sign a letter that the Senator promised he would “make sure … gets to the right people at the IRC.”

In his email, Senator Leach made his intentions clear that the letter was meant “to tell the IRC that the maps for S AZ provide us with the opportunity to send a Republican to the AZ Legislature.” Additionally, the letter was written so “Southern Arizona Republicans … have the ammunition for the 11/12 IRC Tucson meeting. … a great opportunity to put the Democrats in their place.”

Mayor Honea’s assistant Ms. Dralle promptly sent Senator Leach a photograph showing the Mayor indeed signed the letter as requested and did so on Marana letterhead, “as requested.” 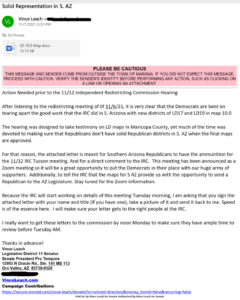 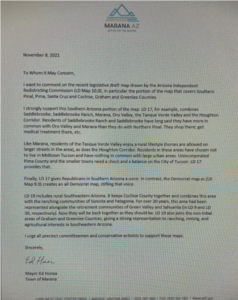 History of the IRC

The Arizona Constitution provides several safeguards to prevent incumbent politicians from exerting their political influence over the redistricting process. Public records from the Town of Marana clearly show that Senator Leach is not concerned with those safeguards and appears to have signaled to Republican IRC Commissioners the map he believes best protects his incumbency. The Arizona leaders who drafted and supported Prop 106 were especially focused on closing any loopholes that would allow a politician to participate in the redistricting process. This is evident both in the constitutional language that created the IRC and in the official “For Arguments” made by the drafters of 106 and published in the General Election Publicity Pamphlet sent to all voters that year.

For too long, both parties have created legislative and congressional districts to protect their incumbents. Such “gerrymandering” eliminates real political competition and shortchanges all of us. Why? Because good people don’t run for office because they don’t think they can win. Incumbents don’t stay in touch with voters because no one challenges them. […]

Safeguards in the AZ Constitution from Prop 106 designed to prevent incumbent interference include:

The research memo that includes the emails described above also examined the creation and introduction of the legislative map Senator Leach’s advocacy efforts supported: SaguaroMaps002.

We outline Commissioner Mehl’s implausible story and inconsistent statements related to the creation and introduction of SaguaroMaps002. We challenge statements made by Mehl touting support for the configuration by “public officials,” when in fact the support is driven by partisan operatives and incumbent State Senator Vince Leach, whose reelection would be all but guaranteed if the LD 17 configuration directly lifted from SaguaroMaps002 is adopted into the final legislative map. And finally, we provide a piece-by-piece analysis that disproves the central argument made by SALC that their organization of CEOs and business leaders from Pima County constitutes a community of interest that has not had adequate representation in the Arizona Legislature.